Spring mornings in the Appalachian Mountains are special.  Just before dawn, an hour or so before the sun rises, birds began to sing.  It can be quite annoying if you’re trying to sleep and there is a bobwhite quail or a whip-o-will close by.  Whip-o-wills are the worst.  They’ve been known to chant their tunes at all hours of the night.  But songbirds wait until an hour or so before dawn to begin their music.  If you get over your need for sleep, you can lay in your sleeping bag and enjoy the concert as the winged choir members anticipate grand things for the upcoming day.  Together, they form a choir praising their creator.  Winter has passed and summer, the season in which they do not have to worry about food and the cold, is just around the corner. Eggs will hatch; there’ll be new life.  It’s as if the birds are singing in thanksgiving. 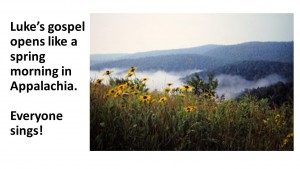 ospel opens like the birds of Appalachia in the predawn hours of spring.  Everyone sings.  We’ll almost everyone, old Zechariah, John the Baptist’s father, was at a loss for words.  But we can bet his heart was singing.  Joining in his song is his pregnant wife, Elizabeth, and Mary, pregnant with Jesus.  And after Jesus’ birth, angels join the chorus for they all understand that a new day is dawning, God’s promise is about to be fulfilled.

Over the past month in my sermons, I have referred to Advent as a time of “remembering the future.”  We saw this with John the Baptist.  John was the last of the prophets of the old age as he points the way to Jesus, the one who ushers in a new age.[1]  Everyone is excited for what is about to occur.  Today, our Scripture consists of two songs, Elizabeth’s and Mary’s.  Each give thanks to God for what is about to happen.  Read Luke 1:39-56.

I have a confession to make.  I like to be in control.  Didn’t come as a surprise, did it?  I like to know what I’m doing and where I’m going and how I’m going to get there.  I don’t like things I can’t control, which is probably why I don’t get excited over cars.  I’m not impressed with how much horsepower is packed under the hood or the size of the tires.  I just want the contraption to get me where I’m going.

You see, with a car, you can be whizzing down the interstate at midnight with everything in order—cruise control set just a hair above the speed limit, the vehicle’s interior climate comfortable, and just the right tune blaring from the stereo, when all of a sudden a water pump breaks.  You’re sitting in the middle of nowhere and reminded once again that you’re not in control.  Some little mechanical gadget that can only be found in an auto-parts store three counties away shatters any allusion of control.  Moments before you were happy and content, now you’re cranky and angry.  Know the feeling?  (That said, I hope none of you have any car problems if you’re travelling for the holidays.)

The desire for control is something instilled into our culture.  We pull ourselves up by our bootlaces.  We take care of ourselves, or at least we are under the mistaken belief that we take care of ourselves.  But we didn’t build the car.  Nor did we build the highway, or refine the oil to make the car run.  We should keep in mind that we always depend on others and ultimately, we depend on God.  We need to get this control fantasy out of our heads.  We need to accept ourselves for who we are.  When we try to make ourselves out to be more than we are, we create an idol out of the self and set ourselves up for a fall.  The higher we elevate ourselves, the further we fall.[2]

Yet, control is a desire we all share.  But it is dangerous because it is incompatible with our faith in God.  We desire to be rich, famous, powerful, popular, the type of individual that is in control of his or her surroundings.  But it’s a myth.  As Christians, our desires should center on pleasing and fulfilling God’s will.  If you question this, consider Mary, the women whom God chose to work through to bring about salvation to the world.

Mary wasn’t rich or famous or powerful or popular.  According to worldly standards, she was the most unlikely candidate to be the mother of Jesus, the mother of God.  She was young and unmarried, probably poor, from a second rate town in an obscure corner of the world.  As far as we know, she had no education and there was no royalty within her blood.  She didn’t seek fame.  Instead, she was absolutely dependent.  She was dependent upon her father to find her a husband and then would be dependent upon him to provide for her and her children.  Later in life, she’d be dependent upon her children to take care of her.  She had no control over her life.  Absolutely none.  She was just a poor women, like 1000s of other poor women, in a dirt-poor town in an obscure providence of the Roman Empire.  She was just like 1000s of other women, except she was chosen to bear the Son of God.  It almost sounds like a fairy tale story, does it?  Except that Mary never inherits a castle.  Her story goes downhill.  She gives birth to her son in a stable, the family flees to Egypt where they live as political refugees, and three decades later she’s there by the cross watching her son die.[3]  She is a woman of sorrow, but despite this her song is one of the most beautiful found in scripture as she praises God for what he had done and is doing.

Mary realizes her position.  She’s a lowly servant and any honor she has is due to God’s action within her life.  Everything is God’s doing, not hers.  She is not the cause of redemption; she’s just a vessel God using to bring the Savior into the world.  Mary isn’t going around boasting of her accomplishments and lining up book deals; she isn’t saying, “look at me, I’m the mother of God.”  Instead, as Luke tells us at the end of the Christmas narrative, Mary ponders all that happens in her heart.[4]  She’s the model of true humility.  Her praise and her life are directed toward God.

Mary’s song gives us an insight into how God operates.  God chose her, an unlikely candidate, to be Jesus’ mother.  God lifts up the lowly while pronouncing judgment upon the powerful—upon those who think they are in control.  We Americans should take notice.  God’s blessings are given to those who understand they have no control in their lives; God’s blessings are for those who, in their humble state, fear the Lord.  At the same time, those who are not willing to acknowledge God’s sovereignty will not find salvation in Jesus Christ.  They’re too busy looking out for themselves and pretending their own resources will save them, they don’t realize they need a Savior.

Have you ever wondered why the poor appear to be special in Scripture?  Think of the verses: Blessed are the poor.”[5]  “It’s easier for a camel to get through the eye of a needle than a rich man to get into heaven.”[6]  Why is it easier for the poor to accept Christ and find salvation?  The poor are dependent.  Those without money must depend upon others for food.  Those without capital must depend upon others for jobs.  And this doesn’t just go for the economically poor.  “Blessed are the poor in spirit.”[7]  Those who are depressed must depend upon others to cheer them up. The poor are dependent on others, they are not in control, and those who acknowledge their dependence have an easier time accepting God’s grace.

All of us need to learn to depend upon God and, by doing so, we need to make Mary’s song our own.  Can we prescribe all our praise to God?  (Or, do we want to save a little for ourselves?)  Can we acknowledge God’s power and sovereignty in this world?  (Or, do we believe in our individual grandeur?)

Mary is in no position to help herself, yet she so totally trust God and sings his praises.  Mary accepts God’s call and gives God thanks for being chosen, which is why her song is remembered.

Mary’s song provides us a model of a prayer of thanksgiving.  If Mary, a woman of sorrow, can sing such a song, if the songbirds who struggle day after day for food and survival can sing such praise, why can’t we?  In all we do, we need to see how God is working in our lives and then give thanks.  We need to take Paul seriously when he says that we’re to be praying without ceasing.[8]   And our prayers need to mostly be prayers of thanksgiving, as we praise God for all that he has done for us.  When we search our lives for God’s blessings and realize just how blessed we are, we are humbled and made even more dependent upon the loving arms of the Almighty God.

During this festive season, don’t forget to give thanks.  Take time to count your blessings.  What has God given you to be thankful for?  First off, he’s given your life; God’s given you a chance.  Secondly, you’re redeemed in Jesus Christ.  That’s a lot!  And what has God done for our church for which we should be thankful.  He’s given us a rich heritage, a church that has served this community for nearly forty years, a congregation that’s free of debt and consists of faithful people who long to make a difference in the lives of others.  We’re a congregation of hard workers—just look at the various projects done in just the past few weeks: a totally redone library, new landscaping, beautiful decorations for the season, a new carillon bells to sing out to our community, and tons of gifts generously given for those less fortunate in our community.  We’re not perfect; for that we’ll have to wait for the Second Advent. We are blessed to be a part of Jesus’ family and such a community as this.

Of course, as the news reminds us daily, we live in a world of violence.  But so did Mary and Elizabeth.  They lived in a world where those who disagreed with the occupying army were crucified and where Roman soldiers enforced the will of Caesar by spear and sword.  And yet, they both praised God for what was happening.  Both knew what God had done in the past and understood that a new age was dawning.  Even John, in his mother’s womb, knew and was excited about what God was doing.  Today, we can be cynical, when considering the violence and injustice in our world.  Or we can realize the message of the cross, which is that violence and evil may have their day, but they are not the final answer.  Be thankful, for the powers of death could not overcome God’s love for the world.  Be thankful, for Jesus will return and establish his rule and every knee will bow in reverence and God will live among us in such an intimate way that he’ll wipe our tears from our cheeks.[9]

I encourage you in your prayers to be like Mary. Remember what God has done and what God is doing!  Paul tells us to rejoice always.  When we regularly give thanks to God, we’ll find that we live differently.  Our lives will be more positive.  We’ll be like the songbirds on a spring morning, reflecting Jesus’ face to a hurting world.  Come, Lord Jesus, Come!  Amen.