The Moravian Love Feast and Savannah 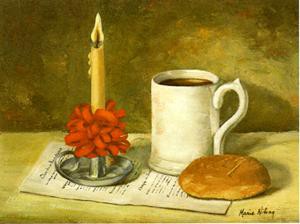 A Love Feast is a service of song, scripture, and prayer.  During the worship service, the dieners (German for servers), serve the congregation a light meal usually consisting of a hot cross bun and a mug of sweetened coffee, tea or some other warm drink.  The feast has its roots in the Agape Meals of the early church.  In the Book of Acts, the New Testament church is described as a community that not only worshipped together but made every meal a joyful celebration as they praised God.  Over time, the church stopped using the love feast and emphasized communion, a meal in which the elements are more symbolic. Communion, also known as the Eucharist or the Lord’s Supper, is a sacrament that is celebrated only by those who are a part of the Christian community.  The Love Feast is not a sacrament and therefore can be celebrated by everyone and is appropriate for ecumenical and interfaith gatherings.  It is a time of joy as the hosts share with their guests.

The Love Feast, as it is known today, originated with the Moravians, a small Protestant sect whose roots can be traced back to the Czech reformer, John Hus.   Hus was burned at the stake in Prague in 1415, over a hundred years before Luther began to reform the church in Germany.  In 1457, some who had followed Hus joined together to form the Unitas Fratrum or the Unity of Brethren, which is still the official name of the Church.   The members frequently experienced persecution. Early in the 18th Century, the remnants of the sect found sanctuary on Count Nicholas Ludwig von Zinzendorf’s estate in Saxony (Germany).  Zinzendorf had food from his manor brought to the starving refugees, who ate while praying and singing.  This experience grew into frequent celebrations that became known as Love Feasts, a distinguishing feature within Moravian worship.

Moravians, seeking new places to live, joined with Oglethorpe’s mission to Georgia in 1735.  It was in Savannah that they celebrated their first Love Feast in the New World.  The church has always been open to cooperate with other denominations and these feasts were open to everyone, not just to the members of the Moravian Church.  John Wesley, the founder of the Methodist movement who was an Anglican priest in Savannah at the time, participated in a Love Feast in Savannah.  He was moved by the service and suggested its observance to his followers.  Through 19th Century, Love Feasts were regularly celebrated in Methodist Churches.

For a number of reasons the Moravian colony failed in Georgia.  Chief among them was the church’s pacifistic stance at a time when Georgia was fearful of a Spanish attacks.  Other reasons included the sect’s desire to evangelize Native Americans and their work upon slaves in South Carolina, internal disputes, and problems with other denominations.  In 1745, the Moravian remnant in Savannah moved to Pennsylvania where they would buy a track of land upon which the city of Bethlehem was founded.   At approximately the same time, another group of Moravians settled in North Carolina, forming several towns including Salem (now Winston Salem).

Although Love Feasts can be celebrated anytime, the Christmas Eve candlelight service is a highlight of the year.  Moravians were big proponents of the Christmas holiday long before the holiday was regularly celebrated in America in the early 19th Century.  Moravians have provided music for the holiday and even named the main town Bethlehem, after the birthplace of Christ.   The multi-pointed lighted stars that are seen hanging on porches throughout the holiday originated within the church during the 19th Century.  These “Moravian Stars,” burning bright during the dark season of the year, signals the coming of the Messiah.

Early on, the Moravians incorporated the Love Feast with their “Christmas Candlelight services.”  The highlight of the service was the closing, when, with joyous singing, the congregation raised their candles in praise and celebration of Christ’s birth.

Ray Burke, a Moravian pastor from Clemmons Moravian Church in North Carolina, describes the Christmas Eve Candlelight Love Feast as a service designed to engage all of our senses.  “We hear the marvelous music and familiar words of scripture that tell of God’s coming.  We smell the warm, rich coffee and beeswax candles.  We taste the coffee and semi-sweet buns.  We touch the cups, the buns, the candles, and the hands of our brothers and sisters in Christ as we greet each other in worship.  We see the joy, the excitement.  But there is more…even beyond the engagement of all our senses, lies that mysterious communion of our spirits with the very Spirit of God.”

This year, the Skidaway Island Presbyterian Church will bring this tradition back to Savannah as they celebrate a Christmas Candlelight Love Feast on Christmas Eve (Thursday, December 24) at 9 PM.   Unlike a Communion Service, which is open to baptized believers, this Love Feast is open to everyone.  The congregation will provide this experience as a gift to the residents of Skidaway Island and Savannah and invites everyone to join them in this special holiday celebration.  Skidaway Island Presbyterian Church is located at 50 Diamond Causeway.  For questions, call 598-0151 or check out the church’s website: www.skidawaypres.org.