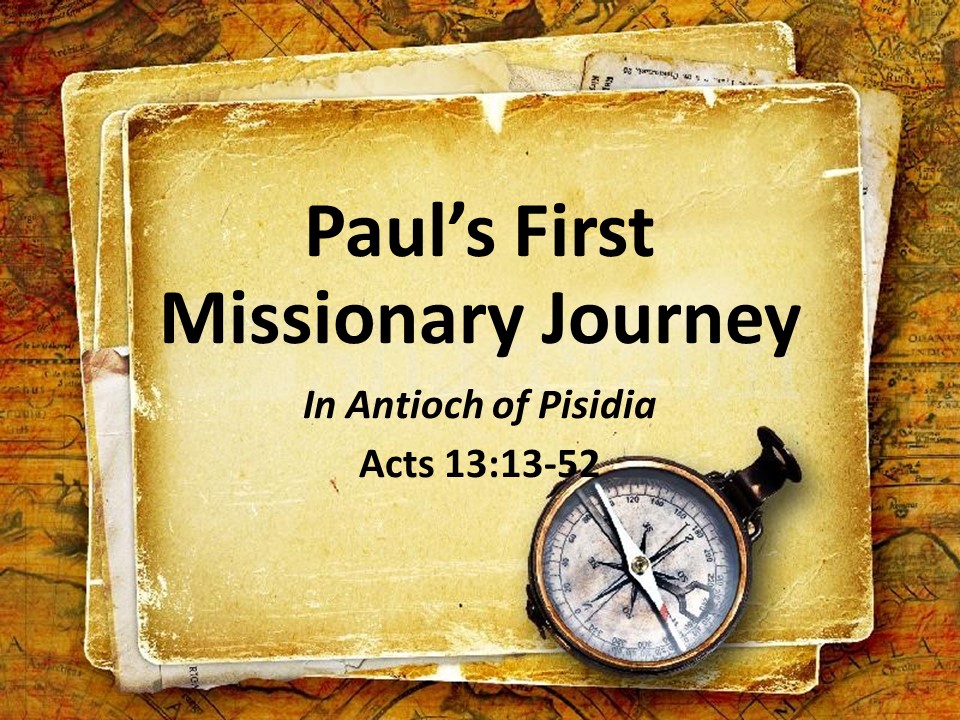 Starting a few weeks before Pentecost 2015 and running through last fall, I preached on the Book of Acts.  That series ended at the beginning of Chapter 13.  Paul and Barnabas had just been commissioned for their first missionary journey.  Today, I want to resume working through this book as we explore this summer (through September), Paul’s first two missionary journeys.  Acts describes the struggle of the early church to make the gospel known to a culture that was either in opposition or unfamiliar to it.  In a way, we’re back at that point today.  In the Western World, it seems as if the church is on hard times and in decline, and to a degree that’s true.  But the church is not dead, for we worship a God of resurrection.  And besides, even though we may struggle here, there are places in the world, especially in Africa and Asia, where the church is booming.

If you remember, last year I emphasized that the book we know as “Acts of the Apostles” should be called “The Acts of God through the Apostles.  Over and over again in these pages we see God working to reach more and more people with the good news of Jesus Christ.  We’re going to hear more about this in today’s sermon.  God is active in the world.  Will we accept God’s invitation to participate in his work?

I’ve broken up the reading for today’s sermon.  I didn’t want you to go to sleep.  This is a very long text, but it’s one unit.   You’ve already heard the meat of the passage, which is Paul’s first recorded sermon in Acts.  Prior to this sermon, we’ve heard of Paul speaking but none of his messages were recorded.  Here, we have a deeper insight into Paul’s thinking and homiletic style.  Now granted, what we have here is probably just a summary of Paul’s preaching, not a verbatim text, but the detail is far more than we’ve seen so far.

You may want to keep your Bibles open as I read the text this morning and then refer to both what I’ve read and what was read earlier in the service.  Read Acts 13:13-16, 42-52. 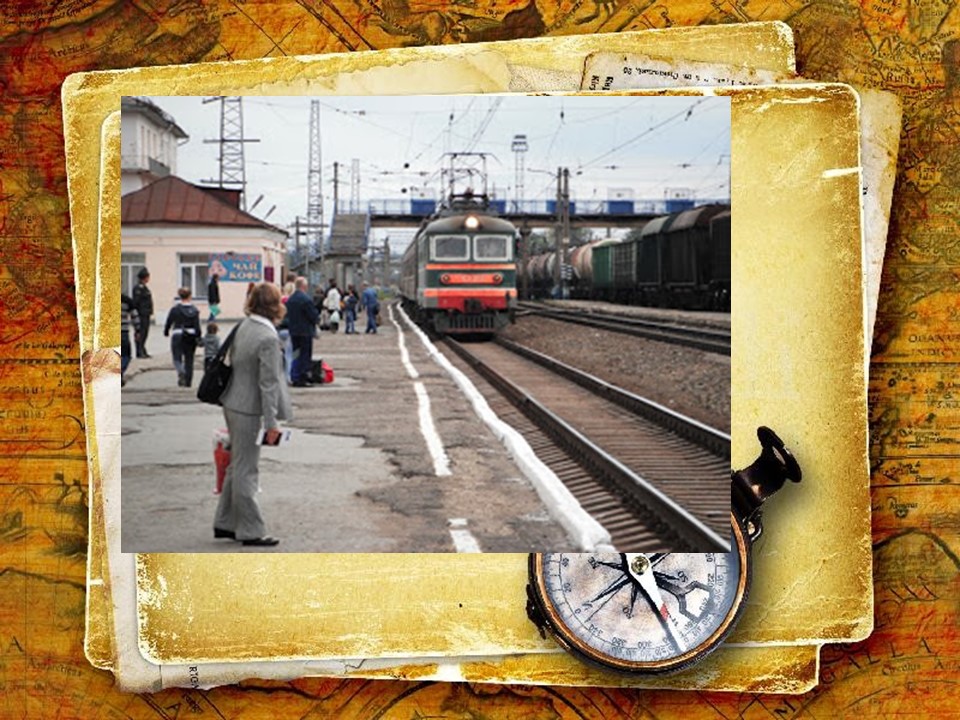 Imagine starting out on a train trip, but you’re not really sure you want to go.  Perhaps you are worried if you turned off the stove or unplugged the iron.   Or maybe you can’t remember if you told your spouse and children that they’re loved?  You wonder, “Do I really want to board this train?  Do I really need to make this trip?  You stand on the platform, trying to decide.  You hear the whistle of the train as it comes closer and finally, it makes the last turn and all a sudden the engines rush by.  You feel the heat of the locomotives from the gust of wind from the rushing train.  The wheels squeal as the train stops.  The car attendants are at the door.  As soon as the train is at a complete stop, they step out, place a stool in front of the door and turn to help those getting off.  Then they help those climbing aboard, offering a hand, handing up their luggage.  The conductor, with this funny little hat observes the passengers as he keeps glancing at his pocket watch.  Soon he shouts, “All Aboard,” and gives a command on the radio.  You got just seconds to make up your mind if you’re going to board.  The conductor steps back on the train as the attendants pick up their stools.  The engineer hits two toots on the horn and the train lugs forward as the doors close.  If you’ve not on the train, it’s now too late.  The wheels turn faster.  The train pulls out of the station and disappears down the line.  You’ve been left behind.  Your indecision resulted in a decision…

Paul, in our passage today, calls for a decision.   Although trains weren’t around in those days, to use the metaphor of a journey, he’s the conductor yelling, “All Aboard” before it’s too late.   Soon, the engineer will hit the horn twice and push forward the throttle.  Soon, Paul and Barnabas will move on to a new town.  It’s time to decide.

Paul and Barnabas have made their way from Cyprus over to Antioch of Pisida.  Luke, in Acts, has to clarify which Antioch he’s writing about.  If you remember, it was in Antioch of Syria that Paul and Barnabas were commissioned as missionaries, right before heading out for this trip.   Having traveled through Cyprus, they are now in the center of the country we know as Turkey.  There, on the Sabbath, the two missionaries go the local synagogue.  It is a typical Sabbath service, including readings of the scriptures (the law and the prophets).  Afterwards, the two are asked if they would like to speak.  The setting reminds us of Jesus, speaking in the synagogue in Nazareth, after the reading from the prophets. [1]  Paul steps forward.

Paul begins addressing his audience, as recorded in verse 16, as “You Israelites and others who fear God.”  It appears that the crowd in the synagogue are not just Jews, but also Gentiles who are perhaps curious about the Jewish faith and if it for them.  In the opening part of the speech, Paul goes back to the exodus experience for Israel and shows God’s hand in giving the Hebrew people the Promised Land.  Next he jumps to the beginning of the kings, mentioning Saul but focusing on David.  Paul links David’s lineage to Jesus due to God’s work.  He also points out the preaching of John the Baptist, again focusing on how John points to Jesus’ coming.  Paul, by going back into the history of Israel, attempts to show how Jesus is a part of God’s long history of working through Israel.  For Paul, you can’t just throw what we call the Old Testament out; it’s all a part of God’s story of working within the world to bring salvation to a fallen race.  The climax of God’s activity is in the life, death and resurrection of Jesus.

Paul’s speech can be divided into three parts, each which begins with a direct address.  The second part begins in verse 26 where he addresses his brothers, “descendants of Abraham’s family and others who fear God.”  Again, we realize this isn’t just a family affair.  There are Jews and Gentiles listening.   The second part deals with the death and resurrection of Jesus.  Paul strives to make sure his audience understands that Jesus was innocent, yet executed.  Those in Jerusalem who called for his death did not understand the prophets, yet in calling for his crucifixion, they fulfilled the prophecies.  Unlike David, who died and was buried with his ancestors and turned to dust, Jesus died but was resurrected and lives.

The final section begins in verse 38, where Paul speaks of the implications of Jesus’ death and resurrection.  It’s through this event, the resurrection, that we can be set free from our sin.  For Paul, the resurrection is the central event in human history.  As important and as good as the law is, it can’t free us from sin.  Only belief in Jesus can.  Paul is crying, “All aboard,” to the gathered congregation.  Believe in Jesus Christ and become a part of this new movement of God within the world.

An interesting thing about this sermon is that it is the only one mentioned in Acts that Paul was able give his message without being interrupted.[2]  People listened and they invite him back on the next Sabbath, where we’re told that even a larger crowd gathers to hear both Paul and Barnabas preach.   The large crowd troubles the Jews, who feel they are God’s special people.  God’s word first came to them, Paul says, but it’s destined for everyone else.  Quoting Isaiah, in verse 47, Paul reminds them of their unique position to be a light for the Gentiles.[3] This makes the Gentiles happy, but many of the Jews want to hold on to their special position.  They only see their own special interest through narrow blinders and feel that the gospel is a threat.  They don’t like the sound of the dying of the old so that the new can resurrect, so they persecute Paul and Barnabas, driving them out of the city.

In a final act at the edge of town, the two missionaries shake the dust off the heels of their sandals and move on to new territory.  This is to symbolize that the persecution is not the final word.[4]  There is judgment to come.  Yet, the missionaries are not discouraged; they are fill with God’s spirit as they head to a new town.

Paul’s sermon reminds us of the decision we all must make of whether or not we accept what God is doing in Jesus Christ.  We have to decide if we’re going to get on board and go to where God is leading.  God wants to embrace the world and too often, like the Jews in Antioch, we want to just hold on to what we’ve got.  We want to look after our own, take care of things at home.  Keep things the same. But that’s not how God works…  God’s vision, God’s mission is that the grace of Jesus Christ be spread through the world.  It’s important to proclaim the message even though not everyone will accept it.  It is necessary to reflect Jesus’ face to the world by offering hope that exists in Christ.  Some will get it; others won’t.  But we shouldn’t get discouraged for we belong to a God who can take what is dead and bring it to life! 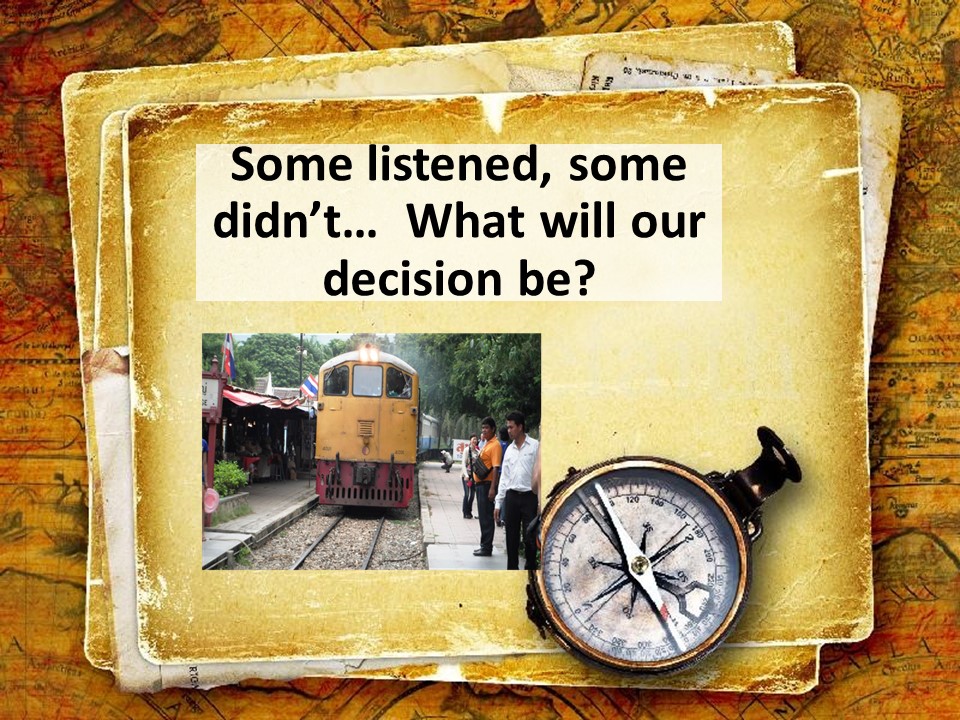 We see in Antioch that some listened.  They were excited about what God was doing and accepted Jesus, proud to be a part of this new movement.  But others didn’t listen or, if they did, didn’t like the implications of the message and closed their ears, eyes, and minds to God’s vision for the world.  Where do we find ourselves?  Do we want to hop up on this train that is calling passengers from all over the world, from all stages of life, from all economic, ethnic and societal groups?  Do we want to help spread that kind of message, one of hope for in need?  Our world is filled with violence and hate, as we saw last Sunday in Orlando.  It is a world longing for hope and God’s hope for the world is in Jesus.  It’s time to step aboard, if you believe.  As the old Southern gospel song goes, “This train is bound for glory.”  It’s a journey we don’t fully know where we will be taken, but we know that God hand is on the throttle.  We place our trust in him.  Hold on, for we’re in for an amazing journey.  Let us pray:

Holy God, our Father in Heaven, we give you thanks for the good news of Jesus Christ and pray that you will help all here make a decision to follow him.  May we reflect his hopeful face to the world and work to further your kingdom. Amen.