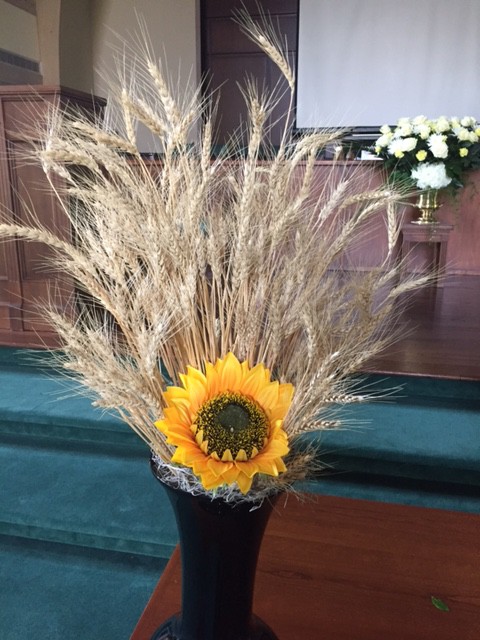 Wheat from the Lowell family farm and a “Kansas Sunflower”

A few weeks ago, Darrel came to my office.  He had learned the treatments of the past year had not worked and there were more treatments in his future.  He was positive.  Darrel was a fighter to the end.  He wanted to beat this cancer.  Trying not to diminish his hope, I reminded him that our lives are ultimately in God’s hands and asked how he felt if now was his time.  Darrel thought for just a second and then said, “That’s okay, too.” He grinned and continued.  “Then I’ll get to go home and be with God.”  Although Darrel considered Kansas home, he knew his true home was with God (but he also wanted to make sure that some of his ashes made their way back to Kansas).  I’m going to miss Darrel, and I know you all will, too.  He was joy to be around.  He was funny, compassionate and caring.
For today’s homily, I want us to look at a few verses from the fourteenth chapter of Romans.  Before this passage that I’m about to read, Paul has been addressing a conflict that had erupted among Christians over whether one day or another was best observed as the Sabbath or whether one type of diet was better than another.  It seems there were some who were being very judgmental of other believers for how they treated the Sabbath or the diets they were keeping.  Paul encourages his readers to be gentle with one another and not to judge, which is advice I could hear Darrel give.  After encouraging forbearance, Paul then says: (read Romans 14:7-9)

We do not live for ourselves and we do not die to ourselves…  Life is often lived these days in the belief that we’re masters of our own destiny, that we are what’s most important.  Individualism reigns.  Although all too common, that is not an ethical position supported by the Christian faith.  Paul, here, reminds us that we belong to someone else.  In his letter to the Ephesians, he writes that we’ve been adopted as God’s children through Jesus Christ.  We belong, not to ourselves, but to God.  Darrel knew this, as he affirmed in my office a few weeks before his death.

Knowing that our highest allegiance is to God allows us to be compassionate in our lives as accept others as part of God’s family.  “I have a wonderful family,” Darrel would often tell me.  “I am really impressed by so-and-so and what they are doing for the church or the community.”  Darrel always thought and spoke highly of others, as a Christian should.  He wasn’t one to harshly condemn, instead he sought to uplift.

You will often find sitting on the desk of my office is this carved wooden prayer cross.  Months ago, Darrel saw it.  He picked it up and felt it in his hand and told me about his own wooden prayer cross.  Mine is made of wood from Michigan; the wood in Darrel’s cross came from the holy lands.  He found so much comfort in the cross that he obtain others to give to those going through their own challenges.  Even though he was dying, Darrel remained concerned over the well-being of others.

The next to last time I saw him in the hospital, the last time in which he was speaking which was this past Sunday evening, he asked me about several people from the church who he knew were having health issues.  Darrel had just received the news that his treatments were not working, and he was concerned about how others were doing!  At that visit, he reminded me (as he’d done on other occasions) how much he’d enjoyed visiting people, and how he appreciated going with me to take communion to those unable to make it to church.  He said he’d hoped to be able to do it again, but didn’t know what the future held.

Darrel had a purpose and, if God had allowed, he was wanting to continue to do what he could to encourage others.  His desire to live wasn’t a selfish desire.  Darrel lived out his discipleship by always being willing to help: he took countless people to doctor appointments and to the hospital.  He visited people who were ill.  As his wife Becky noted, he had an ability to relate to the elderly (and I don’t think he ever acted like he was in his 80s).  He loved listening to the stories of World War II veterans.  Darrel is an example of what it means to be a follower of Jesus and to reflect his face into the world.

Let me come back to his wooden prayer cross.  During his last week in the hospital, I never saw him without it.  He held that carved piece of wood as a reminder that through the cross of Jesus Christ, he’d been forgiven, and that he belonged to God.  Whether he lived or whether he died, he was in God’s hands.  Earlier in Paul’s letter to the Romans, in the 8th chapter (the passage I read at the bedside just an hour or so before Darrel’s death), Paul proclaims that there is nothing that can separate us from God’s love, not even death.  If Darrel had lived, he would have been living for the Lord.  And in death, he was dying for the Lord.  Through Christ, Darrel belonged to God, as do all who have faith in our Savior.

Darrel was proud to have been chosen as an Elder by this church of which he had been a member of since the firehouse days.  I enjoyed having Darrel on Session.   When there was a heated debate, he could be counted on for throwing in a little levity to lighten things up a bit.   He enjoyed visiting people and was more than willing to take on such roles as an elder.  He was concerned about the church and wanted our facilities to look good.  Among the things we discussed last Sunday night was the trimming of the palms.  I was taken-back when he brought it up.  After all, he was in a critical care unit, in bed, with oxygen tubes running around and all kinds of wire connected to his chest.  Again, Darrel wasn’t thinking much about himself as he was of others.

Darrel has gone home, but he has given us a wonderful example of faith and how we should live, not for ourselves, but for others and for our Lord.  Amen.