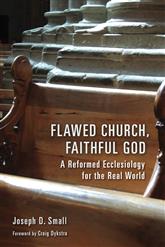 It has been suggested that ecclesiology, the doctrine of the church, is the weak link in Reformed Theology. The Reformed Tradition’s strength is found in a strong doctrine of God, a realistic understanding of the human condition, and the role of Christ in mediating the divide that exists between God and humanity. Doctrines dealing with God’s Spirit and with the institution of the church appear less well developed. John Calvin, in his Institutes of the Christian Religion, spends the least amount of time writing about the church. He includes it in his shortest volume, number 4, where he also deals with civil government and the sacraments. Charles Hodge, the 19th Century American theologian, never completed the fourth volume of his systematic theology. It was to be on the church.  In Flawed Church, Faithful God, Joseph Small, the former director of Theology and Worship for the Presbyterian Church (USA), has made a commendable effort to develop a better understanding of Reformed ecclesiology.

The title captures the thrust of this book. The church isn’t perfect, it never has been and, as long as it exists on earth, it never will be. But God is perfect. Of course, there is much more to this book.

Small begins his investigation of the church making the case of its necessity even though it is a flawed human institution. Quoting Calvin, the church is important because it is our “common mother,” and “there is no other way to enter into life.” (2). He discusses what the church is including comments on how theologians since Augustine have attempted to “redeem” the church by dividing it into the two parts: visible and invisible. Calvin acknowledged our human limitation to distinguish between those who belong to each part, so he and others emphasized the church we know, the visible church. However, in the 19th century, theologians such as Friedrich Schleiermacher and Abraham Kuyper lead a new interpretation of this division, so that today, most see the “invisible church” as the body of Christ. This has its consequences such as loss of loyalty to particular congregations and denominations. (15) While Small acknowledges the church has never been “one,” he does acknowledge that within the diversity of the church, there is a unity within a “confession of the grace of the Lord Jesus Christ, the love of God, and the communion of the Holy Spirit.” (16). Small goes on to discuss our approach of church within the “market forces” of today’s world in which the church is often seen as a volunteer organization among many and is treated as a commodity. Today’s churches market themselves as much as any secular organization, highlighting what is unique about each, a stunning reversal of Paul’s proclamation that we proclaim not ourselves, but Jesus Christ. (2 Corinthians 4:5, pages 18-20). These modern trends concern Paul, who makes the case that we need to explore the church as it is and as it is called to be.

In his chapter on “The People of God,” Small details the church relationship to the Old Testament and to the Jewish people. Again, this is a helpful chapter in which we are reminded of our common heritage. Understanding this background shows the error of the antisemitism of the past, especially where the Jewish people are blamed for Christ’s death (we are all to blame).

Small concludes his book discussion with the hope for the church or the future. While the church depends on hope grounded in the divine and God’s Spirit in our life and future, such hope is not passive, but active. Understanding God’s involvement within the church provides us the confidence to take risks as we strive to strengthen and grow the church.

There is much in this book from which a preacher can draw. I’m sure the next time I preach on Paul’s letters (where he develops his theology of the church around the image of the body), or preach on the work of the Holy Spirit, or on the sacraments, I will pull out this book for further study. At one point, Small ponders the difference between asking, “What Would Jesus Do?” and “What is Christ Doing?” (112)  Certainly the latter requires us to be more engaged in God’s work in the world which we do through the church.