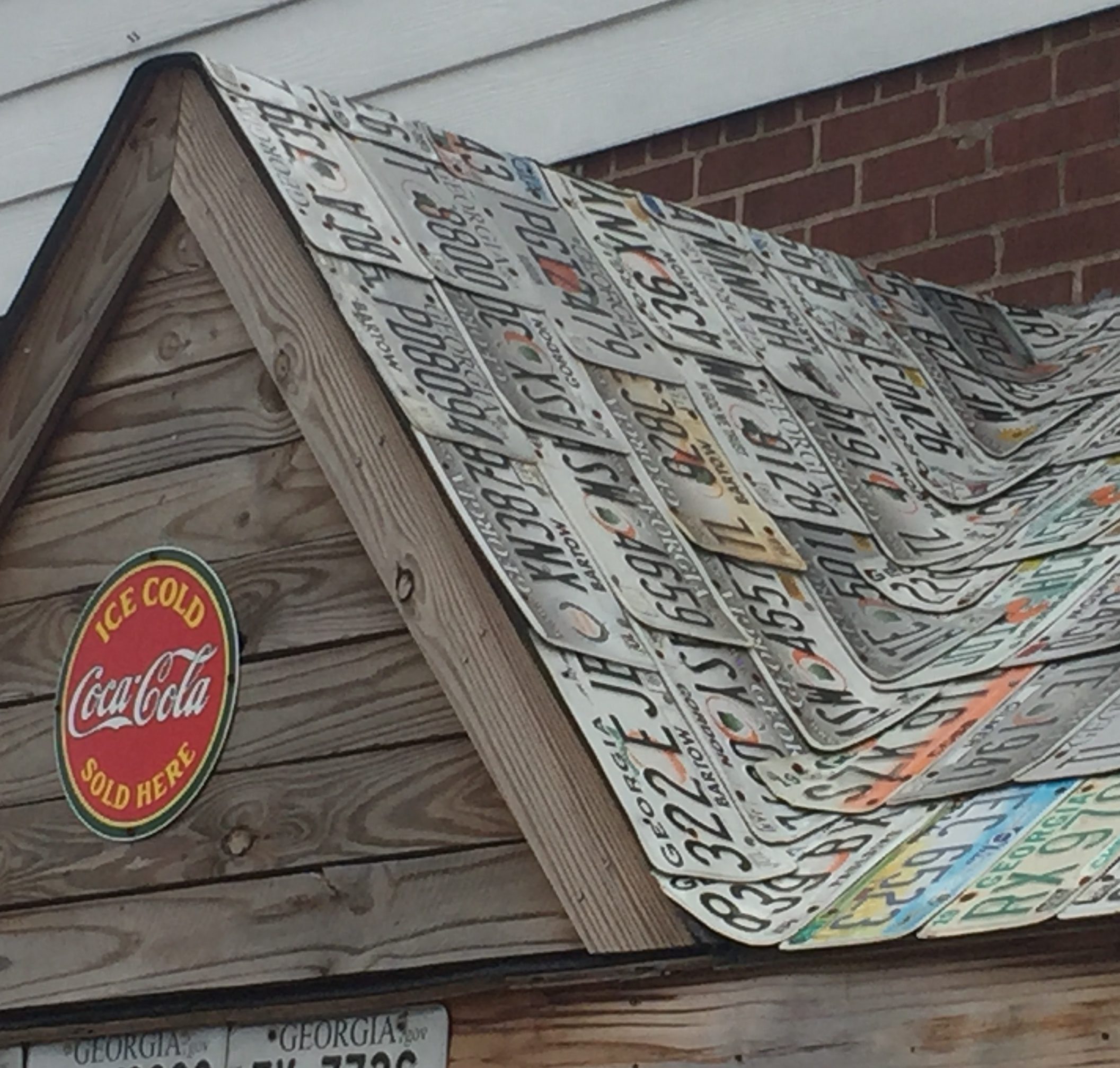 The elevator inside the over-sized Coca-Cola bottle whisks us up to the fourth floor. As we step out and back into the 1930’s, we are greeted by Harry. With his starched white uniform and hat neatly arranged, he stands at attention behind the soda counter.  We’re invited to take a seat on one of the stools and introduce ourselves. This is going to be a communal experience. As we talk, Harry carefully squeezes an ounce of syrup into a six ounce glass and fills the glass with cold carbonated water. After stirring the concoction, he holds out the glass for us to sniff. The glass is cold and the black drink fizzles. It looks and smells like the real thing. Then, surprisingly he pours it down the drain. After getting us in the mood for a Coke, he says he’ll make us one for just a nickel.  My throat is parched and I, along with the rest of my new found friends, search our pockets for the correct change. As the nickels drop on the counter, Harry shows us how to make a Cherry Coke and informs us of the various favors available. Again, we salivate over a cold glass only to have him pour it down the drain. We are told if we want our drink a particular flavor, we must pony up another penny. Again, we dig into our pockets.  Most of us around the counter drop a penny down. Harry begins to collect our money but, upon examining the coins, rejects them. It’s the 1930’s and he’s not going to be fooled into taking counterfeit coins dated in the ‘90’s. We all watch as our drinks are poured down the drain. I’m about as parched as the desert around Las Vegas and ready to come over the counter and fix a glass myself when he informs us we can have all the Coca-Cola products we want on the third floor. We thank Harry for his entertainment and leave the soda fountain with tongues dragging the floor.

Lights blind you on the Las Vegas strip. Its two and a half miles of neon, free flowing drinks, scantly clad women with peacock feathers, exotic tigers, exploding volcanoes, battling pirate ships and the treasures of Egypt and Rome. All the glamour gathered in one place in order to seduce people from hard earned money. In the midst of this most hedonistic zone is the World of Coca-Cola, one of the few places along the strip without slot machines and cocktail waitresses. An old fashion Coke bottle, four stories high, serves as the entrance. They claim it to be the largest Coke bottle in the world, but it is overshadowed by glitter of the Boulevard and the MGM high rise directly behind it. I came down on the strip to ride the new spectacular roller coaster at New York New York (the name of a casino, not the Broadway play).  High winds closed the coaster so I strolled up the strip looking for something else to pass the time. That’s when I saw the bottle of Coke. Not knowing that I was getting into, I crossed the Boulevard and entered the World of Coca-Cola for an educational evening. It wasn’t what I’d expected to find or do on the brightest street in America.

After leaving the Soda Fountain, I stop next door where a local garage is set up.  It’s now the late 1950’s and, in real time, I would have been still riding in a car seat. Just inside the garage is the familiar looking red Coca-Cola cooler with its rounded edges and side mounted bottle opener. I’d seen many such coolers in my life and was amused to learn this one was built in 1957, the year of my birth. 1957 was also the year the interstate highway system was proposed. It seemed appropriate to have a garage in the World of Coca-Cola since the drink and the automobile are linked in our minds. Aunt Liddy had such a cooler in her store at the corner of Murdocksville and Juniper Lake Road when I was a kid. With my granddad, we’d stop at her store for a refreshing drink. We’d each pick an empty bottle from the bed of his pickup, in order to save the two cent deposit, and exchange it for a full bottle out of the cooler. Bottles of Coke were just ten cents apiece in those days. After paying, we’d pop the cap from our bottle and begin refreshing ourselves as we crawled back into the cab. Looking at the cooler, I realized with sadness this American icon has been replaced with glass fronted counters and canned drinks.

My throat is still parched as I leave the garage. I quickly found my way down to the fountain on the third floor. Coke products are flowing freely and we are told we could drink till to heart’s content. I do. First, a cold glass of Coca-Cola, the real thing, and then a sampling of several other drinks they market in other parts of the world. Finally, I go back to the real thing in order to cleanse my mouth of some gingerly tasting drink from India.

There are also two theaters on this floor. In one, I learn about Coca-Cola’s advertising history. I hadn’t realized the jolly old man in red we know as Santa Claus is a trademark of Coca-Cola. This familiar Santa was introduced in the 1920’s to sell a soft drink. As I considered just how well-known this version of Saint Nicholas happens to be, I’m appalled. Could one corporation control our imaginations to the point where they invented the modern Santa? This became even more frightening when I think about how, for many people, Santa has become a model for God. In a round about way, the Coca-Cola Corporation has the power to influence theology.

On the second screen, I watched the development of Coca-Cola advertising on television. I find myself singing familiar jingles and am shocked to realize how many  have remain etched in my brain for decades. My favorite is the kid who comes up to a football player, Mean Joe Green, following a tough game. Tired and sweaty, Mean Joe doesn’t have time to be bothered. A look of rejection comes over the kid, but he offers his Coke anyway. Mean Joe accepts and the audience feel the relief that comes to his throat as he chugs down the drink. As the rejected kid walks away, Mean Joe strips his jersey off and tosses it to him. A big grin comes over the kid’s face. “Gee thanks,” he says as he catches the jersey. There is a positive message in this ad. The generosity of a young boy has the power to change someone as tough as Mean Joe Green. Such generosity could also change the world, provided one has a Coca-Cola to offer. Another commercial illustrated this point. Filmed on a hill in Italy in the mid-1970s, hundreds of people from all over the world, clothed in native dress, sing about offering the world a Coke. While selling its product, this commercial also reminds us how generosity could create a better world. The commercial was introduced about the time I graduated from high school. I was working in a grocery store at the time and had been given a Coca-Cola tee shirt with the products name written in a dozen languages on it. Wearing the tee shirt, I felt as if I was a part of a movement. With the optimism of those hundreds of people gathered on that hill singing, we could change the world for the better. All we needed were a few billion bottles of Coke.

I leave the “World of Coca-Cola” with mixed feelings. I am upset to learn a corporation created the modern Santa. This is almost as disappointing as when I learned, after having kids of my own, that Santa doesn’t exist. However, I also find myself admiring the work of Coca-Cola as I recall the positive message of some of their commercials as well as their willingness to take on Las Vegas. In the middle of the Strip, sexually charged and well lubricated with booze, they proclaim their product as “the real thing.”  Not only do I wish the church could be so bold, I also find myself envious of Harry, the soda jerk. Harry was able to make me thirst for a cold glass of dark syrupy water. Wouldn’t it be wonderful, I think, if sermons made congregations that thirsty for the one who gives everlasting refreshment?

One of the keys to Coca-Cola’s success is the way they tie their advertising to our lives and dreams. The gathering of small town folk around the soda fountain, the lure of the automobile, as well as our desire for peace and the love of Jolly Old St. Nick are all connected to the refreshment potential of cold bottle of pop. The goal of Christian proclamation is to make similar links between Jesus Christ and our every day lives.  There is a lot we can learn.

For a more comprehensive look at Coca Cola and its Christmas branding, click here.