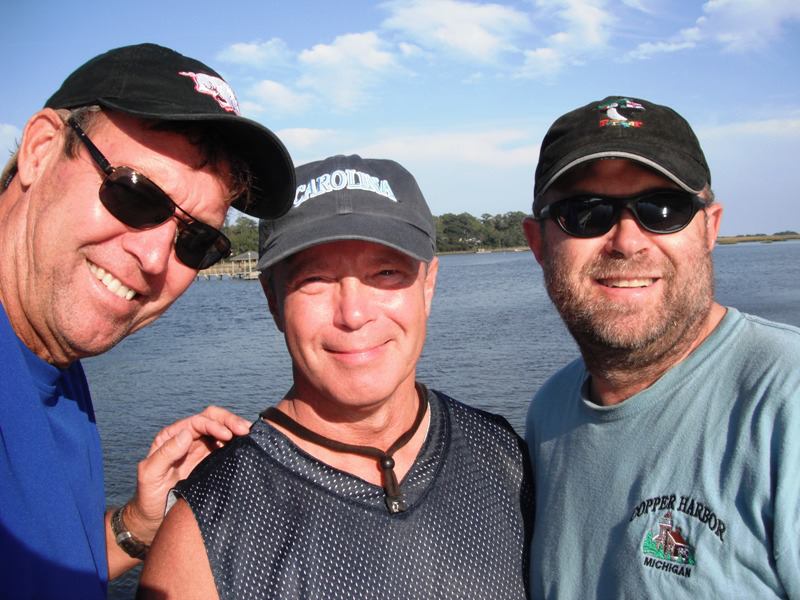 I first met Nicky at the beginning of the 4th Grade when we were both assigned to Miss Freeman’s classroom. A shy boy, he was by far the smartest person in the class. Later, as school boundaries changed, Nicky and I attended different high schools. However, we kept up with each other because his father, Bert, was the manager of Wilson’s Supermarket where I worked in the afternoons. And for many years after I left that job, I would stop by the Supermarket when in town and his dad would tell me about Nicky. Bert was so proud of his son for graduating from Carolina, going to medical school at ECU, studying to be a heart surgeon. Thankfully, about six or seven years ago, I was able to reconnect with Nicky. As you all know, he was a wonderful man.

For my homily, I will use the 100th Psalm, one of Nancy Jo’s favorites. It’s upbeat, a psalm full of joy and music, the opposite of what many of us are feeling this morning. But Nicky enjoyed music, singing in the choir and playing the guitar. Nicky also kept God at the center of his life, which is what the Psalmist reminds us to do in this “song of thanksgiving.” Listen:

Make a joyful noise to the Lord, all the earth. Worship the Lord with gladness; come into his presence with singing. Know that the Lord is God. It is he that made us, and we are his; we are his people, and the sheep of his pasture. Enter his gates with thanksgiving, and his courts with praise. Give thanks to him, bless his name. For the Lord is good; his steadfast love endures forever, and his faithfulness to all generations.

Scholars suggest this Psalm was most likely sung at the entry way into the temple. The first two verses could easily be a call to worship. Imagine the chief priest standing at the gates of the temple in his finest robe. Suddenly, trumpets blast, quieting the crowd. Then, in a loud voice, the priest steps forward to summon the crowd for the awesome task at hand. “Make a joyful noise,” he begins. “Worship the Lord with gladness.” We can imagine the gathered congregation responding as they sing, “To God be the glory.”

Verse three, “Know the Lord is God and that he made us and we are his, we are the sheep of his pasture,” reminds us (as well as those who had gathered at the temple) of our primary purpose. We’re created to worship God. God is our king! Those who first heard this song, as they were preparing to enter the temple, are reminded to put away thoughts of grandeur for themselves, to put away petty differences they might have with each other. They’ve come here together, united, in worship. The fourth verse reminds us to focus on God as we enter the gates singing praises. The Psalm closes with the reason behind our worship: “God is good. God’s love endures forever. God is faithful to every generation.”

This may be a short psalm, but its pack with a wonderful message reminding us to have God at the center of our lives and foremost in our thoughts. God is faithful, even at a sad time like the present.

Nicky believed. He didn’t fully understand why the cancer was happening to him, but he trusted God. He had accepted Jesus and placed in his faith in Savior. Dr. Ken Griffin, a colleague of Nicky’s from Savannah, told me how Nicky was so respected in the medical community and how the “light of Christ” shown through his practice of medicine.

I visited Nicky a few days after Thanksgiving. He told me how he could feel God’s leading his life, often times taking him on a different direction than he’d planned. But God was faithful as he was able to fulfill his childhood dream to become a Doctor. He might not have fully understood why he was sick, why all this happened to him (none of us do), but he felt God’s presence. Nicky confided in me that he had never felt alone since his teenage years. When he was 14 and his parents had split up and his family seemed to be unwinding, he found that God was with him as he was becoming the man we’d know. Even toward the end of his life, when he admitted to having more “bad days than good,” Nicky knew he was in God’s loving arms. He trusted in his Savior and knew his destiny.

Certainly Nicky wanted more time on earth, but it wasn’t just time for himself. This was not a selfish desire. He wanted to take care of his family and to enjoy their presence. Nicky loved Nancy Jo, his wife and high school sweetheart. He adored his daughters Mallory and Madison, and his grandchildren Maisy, Cutler and Brandynn. He cared for his sisters and his extended family.

Over the past few days as I’ve talked to some of Nicky’s friends and read a host of comments on Facebook, many from those of us who knew him at Bradley Creek Elementary School. Everyone commented first on his kindness. Nicky was quiet and shy back then, unlike many of us in those days. Even then, his compassionate nature was witnessed as he spoke up in defense of those who were bullied. He had a tender heart and was generous with his time, his friendship, and his resources.

“The wonderful thing about Nicky is that he never changed, noted his friend Billy Beasley. Billy told me about when they first reunited after decades of not seeing each other, Nicky had asked Billy if he had done anything in school for which he needed to apologize. Billy, the lead knucklehead in a class filled with knuckleheads, couldn’t believe Nicky was asking this. Nicky was always the kind and considerate one.

I spoke with Allen Bosson, his pastor when he lived in Savannah, with whom Nicky had attended several mission trips to Panama and Jamaica. Even though he was a highly skilled surgeon, Nicky helped set the example. He never complained when eating strange food and while staying in hotels which, if they had been rated, would have received a black hole instead of a single star. Allen told of a young girl he was treating, whom he had to refer to the hospital. Afterwards, Nicky was visibly upset because he couldn’t do anything more and was afraid the child would die. Nicky’s compassion, first witnessed when he was just a child, remained with him throughout his life. He didn’t go into medicine to make a lot of money, Nicky wanted to help people and used his God given talents to do that.

Nicky was humble. He never felt special. He didn’t introduce himself as Doctor or Nicky Pipkin, MD. It was always Nicky. Dr. Keith Cobb told me how Nicky volunteered to help him plant a pecan orchard. Keith had also hired some migrant workers and when they were taking a break, one asked Nicky if he did this kind of work often. “No,” Nicky said, “I’m just doing it for the exercise.” The other worker then asked what he did and laughed when Nicky said he was a surgeon. The migrant worker thought this hard working man must be joking.

In his medical practice, Nicky’s skill as a surgeon saved many lives. He also saved one of Keith’s horses who’d snapped a ligament. Keith had tried to sew it back together, but the repair didn’t hold, so he called on the skill of his surgeon friend Nicky. They put the horse to sleep and Nicky used his talents to repair the tendon. They then put a cast on the horse’s leg. After it had healed, the horse recovered beautifully.

Nicky seemed to understand that God had given him gifts that didn’t make him special, but instead were his to use quietly to help others. Whatever the task at hand, Nicky didn’t think it was below him to join in and help out, whether it was sweeping a floor or serving in some other way.

I think it was in August when I talked to Nicky shortly before he went on medical disability. He was torn. He wanted to keep working to be able to better provide for his family. But he knew he needed to make sure he was able to provide the kind of care his patients needed. Shortly after that conversation, Nicky decided to go onto disability and to leave Arkansas and move back to North Carolina. If there was a place in Nicky’s life for pride, it was in his grounding in the Old North State and being a Carolina graduate.

Sadly, his journey back to North Carolina was made only a week before an unwelcomed visitor, Hurricane Florence, came calling. It seemed as if all kinds of storms were raging in Nicky’s life, but as he did throughout life, he didn’t complain. When he had energy, he took care of business and, through it all, was able to enjoy his last few months on Wrightsville Beach listening to the sound of the surf.

We’ll miss Nicky. Carl Mason, Nicky’s childhood friend and high school soccer teammate said to me the other day, “Nicky was the type of individual who inspires us to be a better person.” Yes! And we should draw from the lessons Nicky showed us in his life and strive to be the type of person that looks out for others, one who is always kind, who loves family and friends, and who works to make this world a better place. Furthermore, we should also draw from his private but a very real faith that reminds us, as does the 100th Psalm, that we are not alone in this world. We are loved by God and for that reason, even when we are at the grave, we can sing “to God be the glory.” Amen.